During August of 2006 I rendered this image: 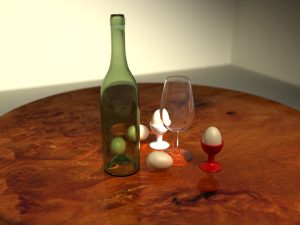 At the time I felt it was the best I could achieve, I’d used all the tricks I had in my bag.
A physics based glass shader, global illumination, final gather and light caustics rendered with Mental Ray from 3DS Max.
I was pretty chuffed with the results!

Recently I decided to come back to the concept, the rules were simple:
– use the same objects, 1 bottle, 1 glass, 5 eggs – two in cups all on a wooden table.
– use the same type of textures.
– I can adjust the camera angle and composition.
– I can use different rendering techniques or engines.
– Everything else stays the same, don’t add geo or effects

With this in mind I set out modelling the simple geo. I learned a few tricks to get good results creating poly geo from a nurbs curve, which perhaps I’ll go into another time.

Mental Ray was my choice as I’d used it in the past and am familiar with the concepts of Physically Based Rendering.
Initially I went about setting up some basic shaders then jumped into lighting, this proved to be slow, and at the advice of a friend I went back to setting up the shaders without lighting.

Once the basics were setup, the almost endless iteration began. Tweaking shaders and tweaking lighting, changing the environment and adjusting the HDR.
Finally I arrived at what I consider an end point, as we could all just keep tweaking until the cows come home.
After two weeks of work I have this image: 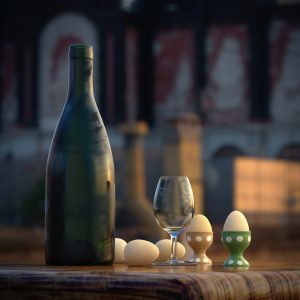 I learned a lot during this project and it was a fun return to some rendering, which I’ve not done for years.

But its not over yet!
Some of my co-workers use the Arnold Renderer and had been saying to me that I should tackle this project in Arnold.
Having started and made some progress in Mental Ray I chose to complete it. Once it was complete I couldn’t help but come back and have another shot.
So once again into the fray of shader setup and lighting. I used the exact same geo, lights and textures. The challenge was to reach the same result.
I’m very pleased to say the working with Arnold was fantastic! The renderer allows for really fast iteration of shaders and lighting.
The render view has some excellent features like rendering selected objects, fast IPR and customization of the UI elements.
To re-create the same scene and image only took two days! 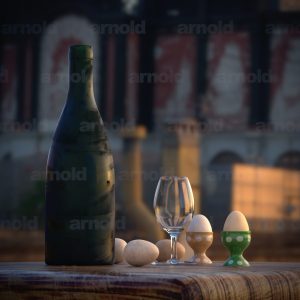 I did find some interesting differences between Arnold and Mental Ray.
Arnold is lightning fast to work with, though I found it to have softer reflections, and the angel of the Fresnel reflections yields a different result.
The bottle glass shader was difficult to setup in each but with Arnold I had to resort to using a samplerInfo node to approximate the refraction through the volume of the glass.
Mental Ray’s reflections are fast and crisp, though its workflow is slow.

To wrap it all up I’ve assembled my work in progress renders into a time lapse and poster it on youtube.